How to Address Fungus Gnats

As anyone who’s fought an infestation can tell you, fungus gnats are no fun! They can be a downright pest when it comes to your indoor plants. In this article, we’re going to give you some solutions for eliminating fungus gnats using Integrated Pest Management (IPM). IPM is a system of pest management that empowers you to work strategically and get rid of pests naturally. When you observe pest patterns and learn to interrupt their life cycles, you don’t have to rely on harsh chemicals. So if you’re ready to get rid of fungus gnats, the first step is getting to know them!

Adult fungus gnats look a lot like mosquitos. They’re small, darkly colored, and have long antennae. They fly, but you might not see them flying all around your home. You’ll mostly find them buzzing around your plants, where they lay their eggs. Baby fungus gnats mature in rich organic matter, and indoor potting mix is their dream nursery. The adults can be a nuisance, but the real trouble begins with those babies.

Fungus gnat larvae eat plant roots and can cause major damage to your plants. Unless your infestation is significant, you may not see the larvae. That’s because they’re in the growing media munching on your plant roots. If you see adults around your plants, that usually means your plants are infested with larvae as well. They can be a real problem if you’re growing vegetables indoors in containers, or if you have houseplants.

Fungus gnats breed rapidly, producing a generation from egg to adult in as little as 17 days. That means you need to act quickly and strategically to wipe out an infestation. There are lots of at-home remedies for eliminating fungus gnats and their root-eating larvae, but it usually takes a combination of strategies to completely eliminate them.

Potato Slices (Yes, potatoes): Placing wide slices of potato on the surface of the soil can attract the larvae, which can give you a read of how serious the infection is. After a day or two, inspect the potato slices and toss them out.

Regulate Moisture: Letting the top 1-2 inches dry out between waterings will create a less hospitable environment for fungus gnat larvae, which in turn reduces their population. Regulating moisture also makes these plants less likely to be selected by adult flies when they’re choosing where to lay eggs!

Yellow Sticky Traps: Sticky traps are the key strategy to address adult gnats. Fungus gnats are drawn to the color yellow, and the adhesive traps them. Be sure to place these traps relatively close to the root zone as this is where the fungus gnats’ population is focussed. Replace the traps when the gnats are no longer getting stuck. Yellow sticky traps are inexpensive and effective for a variety of pests, so it’s a good idea to have some around! Check out Arbico Organics sticky traps here.

Cider Vinegar Traps: Fungus gnats are drawn to cider vinegars, such as apple cider vinegar. You can make a trap by adding a shallow layer of cider vinegar to a cup or jar, sealing the top with plastic wrap, and poking a few small holes using something like a bamboo skewer or a paperclip. Gnats will fly in, but they won’t fly out!

Repotting: Discarding the soil and replanting is dramatically effective at reducing (often eliminating) the fungus gnat population in a single plant. It is important when doing this to be sure to clean as much soil off of the roots as possible, even rinsing the roots, to be sure any larvae have been removed – being careful not to damage roots. However, if the infestation is significant, lingering adult fungus gnats will likely recolonize quickly.

Hydrogen Peroxide: A diluted hydrogen peroxide solution (a ratio of 1:4; 1 part hydrogen peroxide with 4 parts water) kills off microbes in the top soil layers, which effectively eliminates the food supply of the larvae! Reportedly this can also directly kill the larvae; however, this was not the result when we tried this at home. The solution will fizzle for a moment, but it is no cause for alarm! No harm will be caused to the plant or its roots in the process.

Mosquito Bits/Bacteria Thuringiensis subspecies Israelensis: The active microbe in mosquito bits also targets fungus gnat larvae, killing them within a few days of inoculation. Follow the instructions and measurements on the package, but this option is as simple as mixing a few pellets into the top layer of soil and watering to activate the microbes. It may help to mist the soil for a few days after adding these to help the bacteria incubate.

Cinnamon and Chamomile Tea: Cinnamon is a natural fungicide, so it can reduce the food sources of the fungus gnats. Heavily brewed chamomile tea is also a fungicide, so it will have a similar effect. These two methods can be combined as well by using freshly brewed and cooled down (as to not burn the roots) to water cinnamon down into the soil.

Because fungus gnats can be so difficult to get rid of, having a strategy for elimination is crucial. You may be tempted to start with just one natural remedy and see how it goes, but you might actually be allowing them more time to propagate!

Targeting only the larvae or the adults reduces their population, but using just one approach won’t wipe them out entirely, and you could end up with another outbreak down the road. It is crucial to eliminate the whole population at once. The best course of action is consistent treatment and combining treatment methods! Assess what resources you have available, and hatch a plan.

For example, you may put yellow sticky traps and vinegar traps around your plants to capture and kill adults. Since those larvae mature so quickly, you’ll want to apply one (or more) larvae elimination strategy at the same time! Whatever combination of strategies you choose, make sure you’re targeting both adults and larvae at the same time.

If you’ve tried a combination of strategies and are still seeing signs of fungus gnats, re-pot your plants, making sure to clean the roots. After you’ve repotted, apply diatomaceous earth or a combination of larvae-killing strategies to the new growing media.

Ridding your potted plants of fungus gnats can be a drawn out, arduous process. As with everything you grow, just give all the love you can, and trust the plants will do all that they can as well. 🙂

For more pest management strategies, check out our Pest and Disease Microcourse! 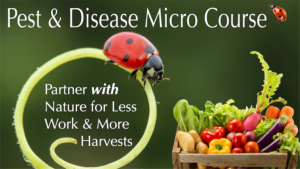 Escape overwhelm in the vegetable garden… here’s how!
Mason Bees: 5 reasons you want them in your garden
Getting Started Growing Your Own Vegetable and Herb Seedlings

What to do if you have no “Browns” for your Aerobic Compost? (Composting in the City)

Adding "Browns" (organic, dry and carbon rich materials) speeds up compost of food scraps in an aerobic bin. What's Stacey's favorite Brown if if she doesn't...