Creating Eden… or something close

Nature is so powerful. The smallest drips of water can create canyons, a flea can catapult themselves up to 100 times their body length and dandelions can root themselves well, anywhere!

But when it comes to solving human problems with nature, we often think nature can’t help us. We spend trillions of dollars researching, developing, and using human-made options. And some of these are life-saving fabulous technologies.

But what if we open ourselves to the idea that nature could help us solve the challenges we face? How much less pollution would there be? How much less work would we have to spend on doing something nature can already do for us and put all that energy into other aspects of life? That’s exactly what one doctor did… and it saved an entire town.

The year was 1907 and malaria was claiming countless lives. Infectious disease specialist, Dr. Charles Campbell, who recently helped end a typhus outbreak in San Antonio by encouraging the town to line their water supply with cement, was now dedicating himself to solving the malaria epidemic. It was just ten years prior that the transmitters of the parasite causing malaria (the female mosquito of the Anopheles genus) had been discovered. While Quinine was recognized as being able to suppress the disease, it wasn’t curing malaria and it certainly wasn’t preventing it.

Inspiration struck and Dr. Campbell set out to partner with one of the most feared creatures on the planet associated with numerous superstitions that still influence us today—bats. 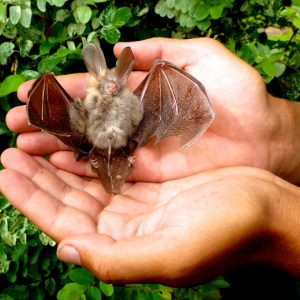 While his first attempts failed, Dr. Campbell eventually succeeded in colonizing bats in a small community just south of San Antonio where 89% of the small farming community w

as infected with malaria. Here at Lake Mitchell, the mosquito populations were so high that livestock would break down fences just to try to escape the swarms.

The structure built to provide the bat colony with a safe place to roost was finished in 1911 and within two nights of the roost being finished, 250,000 bats had gathered. All the insect netting, insecticides, and draining of marshes people tried to help control the mosquito populations couldn’t do near what this one colony did. The bat colony consumed roughly 750 million mosquitoes per night and by 1913, there wasn’t a single new case of malaria in the area.

That’s the power of partnering with nature. All we have to do is think outside the box, look past our fears and superstitions, believe that it’s possible, and experiment (and maybe fail a few times) to find the path where nature and humanity can walk together to create a healthy environment and a brighter future.

And it’s not just about what we get out of the partnership. While the benefits we receive are great, it’s also about the balance in nature that is allowed to exist when we resolve ourselves to become stewards of nature. In the case of the mosquitos in San Antonio, the mosquito population was completely out of control. And that infestation would have continued to be out of control had Dr. Charles Campbell not thought to walk with one of nature’s most feared and misunderstood creatures or had he given up after his failed attempts.

It’s also about what we learn about nature. Echolocation of bats wasn’t discovered until 1938, but Campbell had commented years prior about the mosquito flight tones impacting a bat’s ability to find their prey with such detail that he had even discovered which notes were in the range of attracting a bat’s attention.

But perhaps more than anything else, it’s about realizing what more might be possible? What kind of garden (metaphorical and literal) can we create if we entertain unconventional ideas and practice questioning all of our assumptions? Maybe not something quite as idyllic as the Garden of Eden, but maybe, just maybe, it could be something close. One thing is certain: there’s a deep partnership with nature waiting to be cultivated and a world of solutions yet to be discovered. Your garden is a whole frontier waiting to be discovered, recognized, and appreciated.

And, while already slightly less practical than our usual blogs, in keeping with the sentimentality, here’s a little shout out to Dr. Charles Campbell, whose life and work are an inspiration to how we can work with nature to create a happier, healthier, and a balanced planet.

Related articles you may enjoy:

Do you partner with nature in your garden? Share a time when you learned the power of partnering with mother nature in the comment section below!

What if I told you that you could have SO much abundance in your garden that you’ll start to RIP OUT plants to make room? I know this may sound out there or...